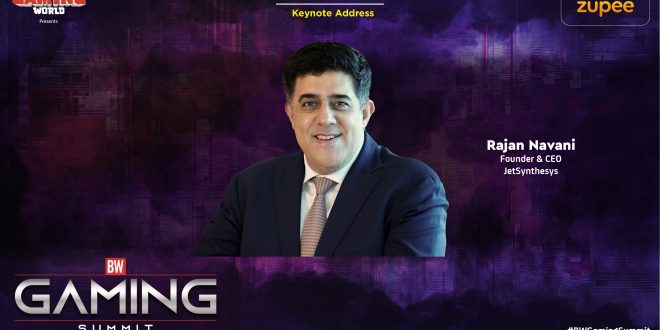 5G Will Change The Shape Of Industry – Rajan Navani, JetSynthesys

We have seen a growth of synergies in the gaming sector, what do you think has been the growth drivers for mergers and acquisitions in this space?

17% per cent of games downloaded on Google Play store last year on the android platform came from India, I think there is clearly a market for gaming and particularly in India and I think this is what is getting a large part of the world excited about India. The Tier 1 and 2 markets, which are very deep monetizing markets are already very well penetrated now, while India is only at 1% of the global gaming market, so I believe the catch-up potential is massive. Being able to have a strong India understanding, the gamers, the execution with and within India, and bringing Indian talent into the fore and then looking at the global potential of that I think is driving a lot of the investments and M&A coming up in the sector today.

Do you think subscription-based models have a good future going forward?

We have been able to drive subscriptions in our cricket games for example, where we have loyal customers who are playing a lot more month on month because they are enjoying the experience. I think a subscription to gaming is significantly different from a subscription to a platform that is more for consumption.  I think subscription eventually will have multiple flavours. It will be interesting to how subscription-based gaming platforms will bring their knowledge to the gaming ecosystem.

What do you think will happen in the 2-3 years to make it the decade of gaming?

While a lot of things have already happened, I think the key driver of this change will be the GenZ population, they are digital patrons, they are not adopters or they don’t need to transition. To me it is not one or three, it will be a coming together of many technologies, like personalization to AI or through immersive experiences through VR or extended reality. Having said that I feel the core technology that is going to change and shape this industry is the 5G technology. Whether it is cloud gaming, multi-platform gaming, being able to create very life-like experiences, I think all these technologies will contribute to establishing gaming in this decade.

Gaming is sometimes referred to as a man’s world, how do you plan on changing that?

The content that is created for specific audiences will appeal to a certain type of audience, and I think over the years that gaming has been popular, it has been shaped by the male audiences, Until some of the different genres of gaming came out that appealed to women. Lately, we are seeing this is not the case, in many of the competitive esports tournaments that we organize, we are seeing tremendous growth in women participation. We are seeing more women taking up gaming professionally, and I’m very optimistic about women opting for gaming as a career. As women get engaged both from a career perspective and a gamer perspective the content maturity will move towards those specific audiences.

The inputs were recorded during a public summit