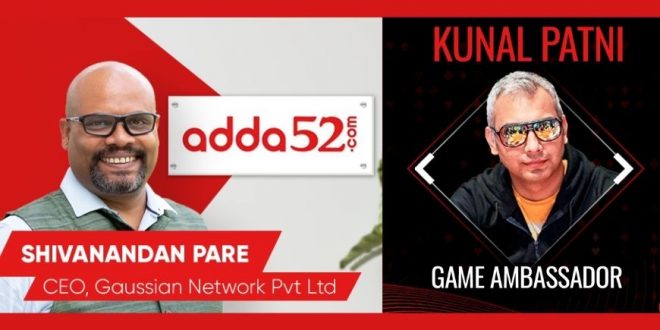 In his six years of poker journey as a pro, Patni has won seven live titles

With an intent to bring poker to a much wider audience, Kunal Patni was recently signed as Adda52’s Game Ambassador. Speaking about the introduction of a Game Ambassador Program at Adda52, Shivanandan Pare, CEO, Gaussian Networks said, “We believe this program will go a long way in evangelizing the game of Poker in India. The idea is to increase the game awareness and ensure that the game becomes part of mainstream pop culture! We are very happy to have Kunal join us in this endeavor.”

Patni’s poker journey has truly been nothing less than spectacular. After completing his MBA from IIFT, one of the most esteemed institutes of India, Patni worked as an investment banker for a decade. Back in those days, he used to relish the game of poker as a means of recreation every once in a while but who would have thought one day, he’d be known as one of the top poker players in the world?

As Patni’s hobby of playing poker gradually turned into his passion, he realized that if played with the right mindset, he can undoubtedly adopt poker as his full-fledged career. So, he soon gave up his banking job to become a professional poker player. Owing to his persistent hard work and immense passion for the game, Patni became a part of Adda52’s Pro team in 2015.

In his 6 years of poker journey as a pro, Patni has won 7 live titles including the ones at Asia Poker Tour (APT), Macau in 2014, and Deltin Poker Tournament, Goa in 2016. One of his best achievements was when he secured 2nd place in the WPT DeepStacks, Berlin in 2018. Kunal Patni ranks 10th in the India All-time Money List according to The Hendon Mob (the biggest poker player database worldwide).

Overjoyed to become the game ambassador of Adda52, Patni said, “I am delighted to be back to Adda52 as a Game Ambassador. I started my poker career as a Pro with Adda52 and it feels amazing to be back home after a short break of one year. Adda52 is the largest and the best poker platform in the country by far and it’s an honor to be representing the same as a game ambassador.”

With an aim to increase the popularity and create awareness pertaining to the game of poker, Adda52 has launched this game ambassador program. Through this program, Kunal Patni, as the game ambassador, is all geared up to demystify poker by sharing his knowledge via various methods, such as live sessions, hand analysis, recorded videos, etc.