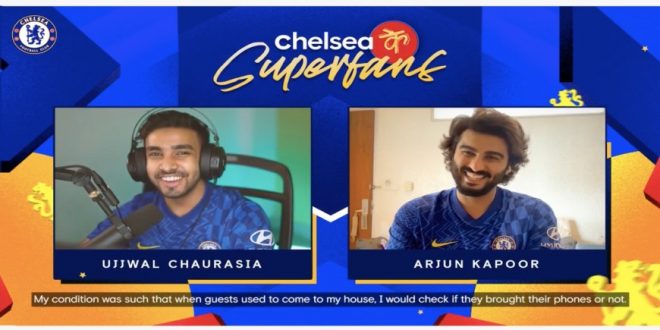 Speaking to Arjun Kapoor, Ujjwal narrated that he has been a Chelsea fan since his friends introduced him to the club during the run-in to the club’s memorable Champions League triumph of 2012. During the fun conversation with Arjun Kapoor, Ujjwal also revealed that Eden Hazard is his all-time favorite player, and John Terry, his favorite captain.

“I loved the way we started this year. Great to see such a tough team, and I am sure we would at least bag the Premier League this year” Ujjwal said.

Speaking about his appearance on Chelsea Football Club’s exclusive talk show, Ujjwal Chaurasia said; “I am very excited to be a part of Chelsea Ke Superfans. It is interesting to see traditional sports recognising emerging esports players like myself. It was a great time sharing the screen with Arjun Kapoor discussing my journey and things related to football and esports. The fact that the football team I grew up watching and supporting sees potential in gamers like me is a testament to the fact that the gaming and esports industry is growing at a very rapid rate in India. From brands to Bollywood to traditional sports clubs, it is great to be a part of this growing potential for gamers, especially for my favourite football club – Chelsea FC.”

Speaking about Ujjwal’s appearance on Chelsea Ke Superfans, OpraahFx founder Pranav Panpalia, said; “Gaming and sports have always been two faces of the same coin, and in today’s world it is important to have a healthy balance between the two. Since both sports are interconnected in some way, we were thrilled to feature in Chelsea’s digital show. Ujjwal is also passionate about football and we were amazed by his thoughts about the gaming and football industry. Bringing the best of both worlds – football and gaming – we hope this will be one of the best episodes of this season. Having gamers collaborate with brands like Netflix, Spotify, and Marvel Studios, we at OpraahFx are committed to driving a shift in the Indian gaming community by bringing together gamers and non-endemic brands.”