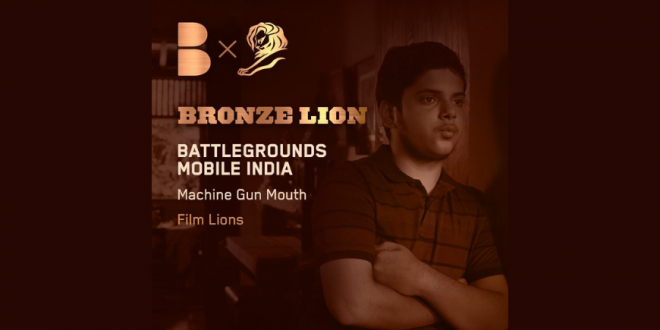 The slew of awards for this campaign began with a Grand Prix at Spikes Asia Awards, supported by two golds, a silver, and three bronzes. The film then went on to win a Gold and a Bronze Lotus at Adfest 2022, three golds and a silver at the ABBY’s, a Graphite Pencil and three Wood Pencils at D&AD, seven Blue Elephants and ten Baby Elephants at Kyoorius. The icing on the cake came at the Cannes Lions International Festival of Creativity, wherein the film garnered four shortlists and bagged a Bronze Lion in the Film category.

The campaign film employs gameplay sounds of BGMI as a metaphor for excessive gaming wherein the protagonist is shown mimicking the sounds incessantly. Humour is employed to drive home the features introduced by BGMI to combat continuous gaming, including OTP authentication for minors and limits on daily in-game spending. The film embeds the problem of over-gaming and its subsequent solution of parental control features into a relatable narrative that appeals to multiple audiences.

Speaking on the film’s stellar performance at awards shows, Rahul Mathew, Chief Creative Officer, DDB Mudra Group said, “Film isn’t usually the medium that we’re known for as a country. So, to have a film that has been celebrated on every stage globally is quite an honor for all of us.”

“This is a historic moment for us, and we are incredibly proud that our collaborative work with DDB Mudra has been so highly awarded. The campaign had a plethora of challenges to creatively spreading awareness about in-game safeguards, and bringing gamers, families, and friends on the same page. Here at KRAFTON, Inc., our efforts are focused on ensuring safe, and responsible gaming while prioritizing our gamers’ mental and physical wellbeing. The campaign was successful in reiterating BGMI’s responsible gaming measure in a manner that resonates with multiple audiences.” said, Minu Lee, Head of India Publishing, KRAFTON, Incorporated.

The Game Responsibly campaign not only speaks to gamers but also brings their friends and parents into the conversation. By educating all three audiences, the campaign shows that there are simple solutions for an obsession that may otherwise have serious long-term effects.