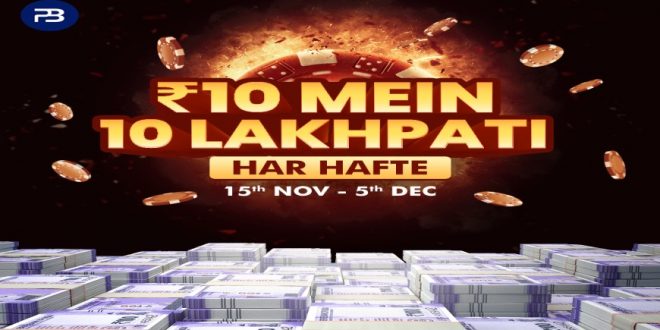 In each weekly tournament, 10 winners will take home Rs 1 lakh each, and the 11th place winner will be gratified with OnePlus Nord

PokerBaazi, an Indian online poker platform from the house of Baazi Games, on Monday, announced the commencement of  the ‘Rs 10 mein 10 Lakhpati’ online poker championship.

The championship will span over three weeks and will be conducted between November 15 to December 05, 2021. Each tournament in the championship will run for a week from Monday to Sunday and eventually result in a reward of 30 Lakhpatis (millionaire) by the end of the full season.

With more than 3 million online poker players in India and the online poker industry presently growing at 35-40 per cent year on year according to estimates by KPMG. Meanwhile, the Rs 10 mein 10 Lakhpati’ is an attempt to carry forward the momentum and stimulate the popularity of the sport, the official statement read.

“After the immense participation that we witnessed in EndBoss, I am certain that this championship will only up the ante. The poker landscape of India is becoming stronger year on year, and I am glad that PokerBaazi.com has a role to play in it. With ‘ Rs 10 mein 10 Lakhpati’ we want to attract new talent to the platform and ensure that we keep unearthing the next generation of poker stars of India,” said Navkiran Singh, Founder and CEO at Baazi Games.

The championship aims to take a step towards creating an ecosystem of budding poker players and with a minimal buy-in cost of Rs 10, it provides an opportunity to the participants not only to win Rs 1 lakh.