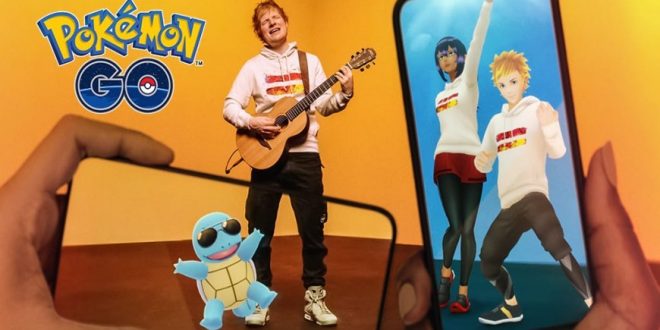 Ed Sheeran All Set To Feature In Pokémon GO

Players will be able to attend a pre-recorded virtual performance in celebration of the release of his new album, “=” (Equals)

Niantic’s Pokémon GO on Friday has said that it is going to conduct a special concert event in collaboration with international singer and award-winning artist Ed Sheeran. The in-game event will last for 8 days which is going to start from November 23 to December 1 at 2:30 AM IST.

Players will be able to attend a pre-recorded virtual performance in celebration of the release of his new album, “=” (Equals).

Pokémon GO took to its official Twitter handle and wrote, We’re excited to announce that, for the first time ever, we’ll be collaborating with the Grammy-winning singer-songwriter, Ed Sheeran.”

“That’s not all! In celebration of Ed Sheeran’s favourite Pokémon, Squirtle wearing sunglasses will be returning to Pokémon GO. We might be ‘Thinking Out Loud,’ but the thought of catching this Squirtle again feels so ‘Perfect’ that it’s giving us Shivers,” it tweeted.

As per the official statement, a Special Ed Sheeran performance will be available through the Pokémon GO app. Players will be able to check out the performance in the in-game News beginning on Monday, November 22, 2021, at 11:00 AM PST (GMT −8).

Invented by Niantic, Pokémon GO is a reality mobile game where users can make their own versions of trainers and visit real-world locations to catch Pokémon.