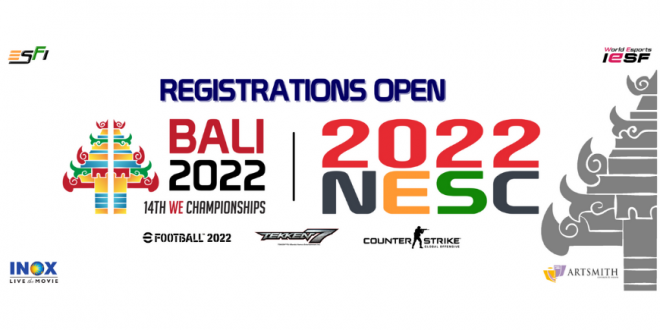 The National Championships will be held virtually with top athletes from across the country engaging in a high-voltage competition in the popular games: eFootball 2022, CS:GO and Tekken7.

The DOTA team, comprising of veteran athletes like Moin Ejaz (captain), Krish, Abhishek, Ketan & Darshan, which qualified for the 2022 Asian Games, will be part of Team India for the 14th World Esports Championships.

“We urge all esports athletes to participate in large numbers and become a part of the Indian esports contingent for the 14th edition of the World Esports Championships. The increasing interest for esports in our country currently is encouraging us to push the envelope and give the athletes and the audience something new and exciting each time,” said Lokesh Suji, Director of Esports Federation of India and Vice President of the Asian Esports Federation.

“This year’s World Championships will be the biggest in history with around 1,000 pro teams/athletes expected to participate. We also have multiple prestigious tournaments coming up like Commonwealth Games, Asian Games, etc. This truly is the esports fraternity’s time as the ‘rising-sun’ and ESFI is all geared up to make India an esports powerhouse globally. I am certain that our esports contingent will not only put up a strong fight but also strive for a podium finish,” Suji added.

The Indian contingent, selected based on their performances in the NESC2022, will take part in the World Esports Championships Regional Qualifiers, for which dates will be announced soon by the IESF. The Regional Qualifiers will be organised along with the other continental federations.

The Global Finals of the World Esports Championships will take place in Bali, Indonesia from November 27 to December 9.

Country’s one of the top sports & esports communication agencies, Artsmith-Concepts & Visions, will continue its support to the Esports Federation of India as their official communication partner.

The registrations for the NESC2022 have started on Wednesday (June 1) with the last date being June 15. Link and other details for registration are available on the ESFI Discord server: https://discord.gg/esfi

The NESC’22 will be played in a double-elimination format. The exciting action from the Championships will be streamed live on ESFI’s official YouTube, and Facebook page.