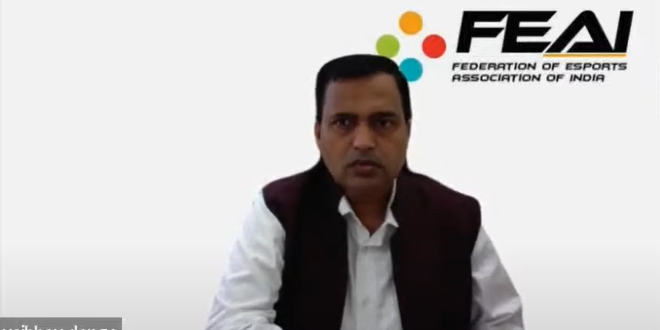 Esports Is An Overall Component Of The Gaming Industry: Vaibhav Dange

The government has recognised the Federation of Esports Association of India (FEAI) for having a 3 per cent contribution in today’s gaming industry which is growing globally, said Vaibhav Dange, Founding Director and Member, FEAI on Friday.

While speaking at an online gaming summit, Dange said, “Though we are currently at 3 per cent in participation, these numbers are going phenomenally up and it will reflect in a few years.”

According to Dange, eSports is an overall component of the gaming industry. Players, team owners, tournament organisers, game developers will all have a role to play in this component.

“We also look at how we can bring Indian games in this arena and we are trying to develop a bottom-up approach,” he said.

Dange also pointed out that the typical age group of people playing esports is 15-20 years of age and FEAI is looking at ensuring their contribution to esports even after that, so that it can be a livelihood option.

“We are looking at developing an ecosystem which is for Indians and by Indians and is capable of taking India to the global level” he further said.

“Today, India has a gaming viewership of 450 million and 48 per cent of them are YouTube gamers,” he said, while also emphasising that the private sector will have to come up with solutions by developing skill-based game