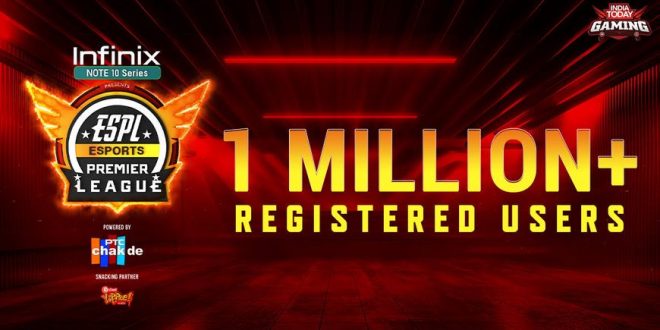 The inaugural edition of the nation-wide Esports league, Esports Premier League (ESPL) 2021 has seen an unprecedented response among the gaming community with massive 1 million registrations and has just concluded the last user registration phase. Due to the COVID-19 pandemic, Season 1 of the league is being hosted virtually for two and a half months. ESPL 2021, which has Infinix smartphone as the presenting sponsor, is being played under the aegis of a gamer-centric campaign #ESPLGameSeFame that encourages players to showcase their top game and get recognized in the industry.

India’s first-ever franchise-based Esports league for Free Fire, ESPL, is preparing for the Second Level of the tournament. Out of the more than 1 million registered users, about the top 400 players from 88 teams will move to Level 2, where the top 8 invited teams of India join the mix. This will take the total number of teams to 96 teams in the level. These teams will be divided into 8 groups of 12 each to compete for the top 8 spots. The top 8 teams will represent the 8 regions of ESPL.

At the end of Level 2, ESPL will have the best Free Fire teams from India. The scale of the tournament highlights ESPL 2021 as the platform for all the Free Fire players to showcase their skills. The tournament crossing 1 million registrations serves as a testament to outline the importance of the platform. This number also points to the gradually increasing interest in Esports in India. Most of the gamers signed up to take part in the tournament in the last few days of the registration phase and this number is a testament to the far-reaching impact and popularity of the league in the gaming spaceIn the initial phase itself, the league has managed to create a strong buzz and catch the attention of gamers with its high-octane and nail-biting matches in the game Free Fire.

“The astounding figures we have for the registration numbers of ESPL 2021 itself validate our position in the Esports sector. We are extremely happy by this overwhelming response to the inaugural edition of India’s first-ever franchise-based Esports league. What these amazing numbers tell us is that Esports is set to create history in India — both in terms of its growth as well as the interest, it is rapidly garnering among India’s youth. Competitive Esports events like the ESPL are setting the bar very high and propelling the industry to greater heights. The second phase of the league has all the action and current scenario working as a catalyst for our league, so be assured of a rocking & entertaining season,” said Vishwalok Nath, Director, ESPL.

This phase has a lot more in store, as exciting live action will be available on OTT giant Disney+ Hotstar, Free Fire official streaming platform Booyah and Malayalam OTT platform Koode alongside official YouTube and Facebook channels of India Today and Aaj Tak and its websites.