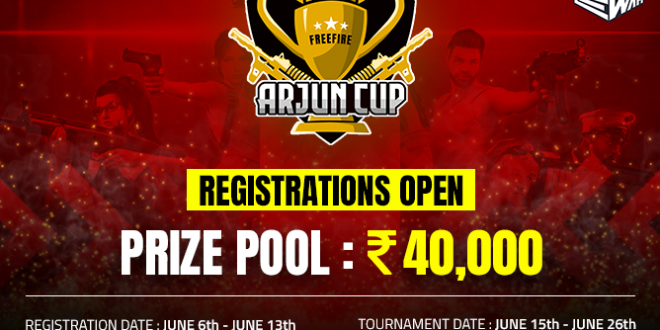 Gaming and esports startup EWar Games has launched FreeFire Arjun Cup, a flagship tournament by EWar, in a bid to promote and escalate the ‘esports vibe’ in India’s thriving FreeFire gaming ecosystem. The ongoing tournament will provide a wonderful opportunity for the rising stars as well as a plethora of lesser-known players of the Garena FreeFire game in India to showcase their FreeFire gaming skills/capabilities in a fun-filled yet competitive gaming arena facilitated by EWar. Arjun Cup matches will be live-streamed on EWar Games official Youtube Channel as well as on Dev Alone Youtube – a channel that has 1.1 million subscribers.

The 12-day-long tournament is witnessing participation from 2000 amateur, underdog, and emerging FreeFire teams from various parts of India. The tournament has a total prize pool of INR 40k; its cash prize-based rewards will be given out to the winner, 1st runners up and 2nd runners up teams, as well as one ‘Most Valuable Player’, once the tournament ends.

However, more than the monetary prize, what seems to be more attractive or valuable for the tournament’s participants is a ‘trophy’ designed by EWar, which shall be given to the winning team of the tournament; this is the first time that an online Free Fire esports tournament in India will have a real (physical) ‘trophy’ as a reward!

Speaking about the event, Nauman Mulla, Head of Esports, EWar Games says, “Off late, we have observed that the excitement and passion related to esports is somewhere missing amongst the Indian Free Fire gamers’ community. Therefore, with the launch of our latest initiative – Arjun Cup, EWar is aiming to bring back the esports-type feel, enthusiasm, and passionate competitive environment for budding Free Fire gamers in our country. To that end, we have already partnered with some well-known and sought-after names in the Indian Free Fire gaming space.”

“In this event, Arjun Cup, so many underdog teams of Free Fire will be competing against each other in the Qualifiers phase, and later with the popular Free Fire star players whom they possibly follow and love already! Hence, we strongly believe that EWar’s Arjun Cup is not just another Free Fire tournament – but an outstanding opportunity for Free Fire enthusiasts to play and wow the audience with their skills, earning fame and recognition plus getting a rare chance to win a cash prize and also an actual trophy,” adds Mulla.