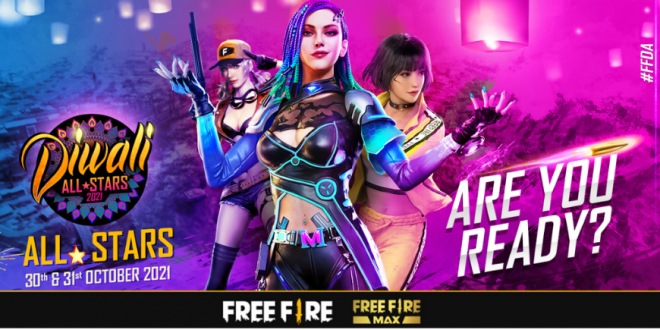 Garena has announced Free Fire Diwali All Stars 2021, the tournament’s second edition featuring an all-new revamped format. Apart from popular influencers and top players, this year’s edition will feature top female gaming talent from the country.  It will also feature 6 community chosen influencers and participation from Top FFIC 2021 Fall teams with the prize pool being the in-game currency of 100,000 diamonds each day.

The tournament looks to:

Top female streamers, pro teams and community voted influencers to battle it out

All of the matches will be played in Battle Royale Squad mode in a Best of 4 format. On the first day, 11 female influencer teams will battle it out for a spot on Day 2 and for a prize pool of 100,000 diamonds. On Day 2, the top 2 teams from Day 1 will be joined by the 6 community chosen influencers and the top 4 teams from FFIC 2021 Fall. These teams will then compete for the crown and a prize pool of 100,000 diamonds, with the event being hosted on 30 and 31 Oct.

The FFDA 2021 will be broadcast live for both days in 5 languages – Hindi, English, Tamil, Bengali and Nepali. Fans can tune in to the Free Fire Esports India YouTube Channel and BOOYAH! to catch all of the high-octane action!