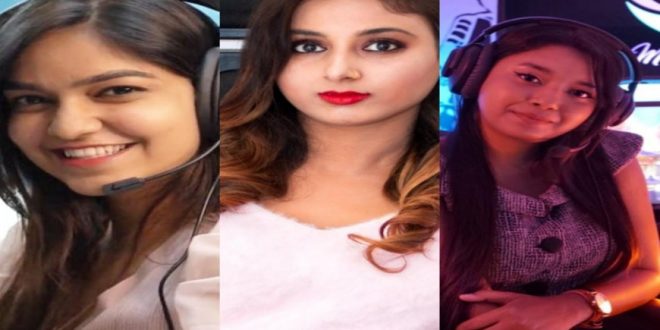 Game To Stay: Meet Aparna, Kangkana And Sakshi Who Are Breaking Stereotypes

Over the last two years, streaming has become a solid and popular career option for many in India. In a positive development, several female streamers are paving the way in the gaming ecosystem in the country

Approximately 18 per cent of all gamers in India are women. However, the number of women is increasing rapidly as compared to male counterparts, according to ‘Think With Google APAC – Play like a Girl Report, 2020’.

Presently, streaming and watching online streams and games are getting more and more common with each passing day. According to the data, streamers are attracting major numbers. Now here are the three top female streamers on social media giant Facebook:

Aparna Shukla ( page name-Rog Stream) who is from Kanpur, initially was preparing for competitive examinations to join the banking sector, however, she ended up choosing an unconventional career like gaming, which is not usual for an Indian child, especially for a girl. For Shukla, gaming started as an activity for leisure time and has become a full-grown passion.

“I took to online gaming in September 2018. One day, my brother gave me his phone and asked me to play some games to relieve stress. I played Candy Crush at that time, then PubG with my younger brother. My elder brother suggested that I participate in a gaming tournament as a side hustle. At that time, I didn’t have a computer to play games and used my brother’s friend’s computer. Once I got the feeling that I could make a profession out of gaming, I asked my father to get us a computer. What started as a side-hustle has become my passion now,” said Shukla.

In her initial days, limited resources were the main problem for Shukla. Being a woman of a small town, she could either choose between becoming a teacher, a doctor or a banker. Apart from that, financial issues are also a major issue that she had to deal with.

“Outside of financial requirements for a PC and to start gaming, I have been able to overcome mental barriers thanks to the support of my brothers. I also was a little hesitant at the start, but I overcame this by putting myself out there and gaining more confidence as we went ahead in time,” said Shukla.

Kangkana Talukdar who runs a Facebook page named- Mystic Ignite, is a 23-year-old girl who comes from Assam. She is simultaneously managing her studies and is a final year MBA student.

“I started gaming when I was really young but I lost touch for a few years. When I started streaming again, I did have a hard time adjusting at first, but with the love and encouragement from the gaming community, I grew not only as a gamer but also as a human,” said Talukdar.

Northeast is the region which is termed as one of the most ignored areas as far as economic schemes and any other issues are concerned. For Talukdar, becoming one of the top female streamers was not easy.

Talukdar said, “I come from a middle-class family and I have a single mother. Through gaming, I am successfully able to earn and fulfil my needs which is a great relief for my mother. Since I am able to support myself financially and also fund my college fees, I feel that this is an honourable achievement.”

For Talukdar, her mother is her biggest supporter and helps her to face the challenges that life throws at her. She said, “My mother supported my dreams and bought a second-hand PC for me so that I could pursue my dream. Due to my continuous rigour and efforts, I was able to purchase a Gaming PC and now I stream using that. I would like to thank my mother for her continuous support in my journey as a streamer.”

However, the dark side of the internet or digital world has not spared anyone at this time and Talukdar is no exception. Dealing with trolls and online harassment has become a part of the process.

“As a young streamer and a creator, I felt that some of the negative comments or trolls would be bothersome. However, with time, I have developed a thick skin and learned not to bother about them,” Talukdar added.

“Well, I do see people being toxic in-game if they know that you are a female gamer. They just expect you to be bad by virtue of being female. I think we need to move from that to be more supportive of female gamers,” Talukdar said while talking about workplace bias.

Sakshi Sood who runs a Facebook channel named Sassy Sood can be called an accidental gamer. Sood started streaming on the suggestions of my friends and never thought about it before.

However, the COVID-19 pandemic which created havoc in the entire country was not that bad for her, as far as her career is concerned.  During the lockdown, she started playing games with her friends.

“I started streaming a year ago when I turned 21. I have always loved playing games since they help me refresh my mood and relax my mind. I also like to interact with people, and I can showcase my talent to the audience with game streaming,” said Sood while describing her journey as a gamer.

Sood talked about the challenges gamers face in digital space. For Sood, convincing her parents that she wants to pursue gaming as a career was not an easy task. However, her parents support her in her choice of career.

“I get negative comments on my streams and it is really disheartening. Some people also comment that gaming is not for me, but now I ignore such comments because I feel that they are not worth my time. Sometimes, I also reply or just simply block them,” said Sood.

Sood strongly raised her voice against workplace bias in the present time. Sood, however, believes that today’s situation is slightly better if compared with the earlier times.

“Even today, people have this mindset that girls don’t know how to play well and I strongly feel that this thinking should be changed. We should organise more events for girls and boys to play online games together. It’s not about proving that women are better than boys, it’s just we have to show the world that men and women can go hand in hand,” Sood added.

“Facebook has played an immense role in my journey and has enabled me to reach where I am today. Due to Facebook’s global reach, I have been able to build a community with an audience across continents and I see them having fun watching my streams. Facebook has helped turn my dreams into reality,” said Shukla.

Globally, more than 200 million people watch live gaming videos each month on Facebook. We increased 118 per cent in hours watched year-over-year (201M in Jan ‘20 compared to 439M in Jan ‘21). Also, with Facebook Gaming’s monetisation, creators can earn through the platform.

“Facebook has been instrumental in my journey in streaming. I find the audience on FB to be more mature, and since it is one of the largest platforms, you can also connect with your viewers on a personal level. You can know their real names and nobody is using a username so to speak,” said Talukdar.

“Facebook has provided a platform for female gamers and also has dedicated events for girl gamers. They provide us with different types of equipment for streaming and have helped me secure brand collaborations as well,” said Sood.