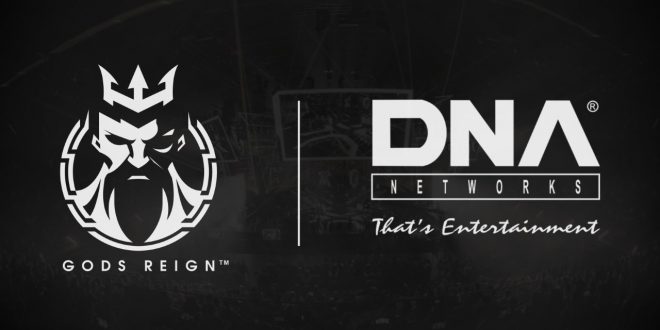 Esports and gaming entertainment company Gods Reign announces an exclusive partnership with DNA Entertainment Networks, an event management company pioneering in sports entertainment. Under the association, the companies will explore avenues such as revenue generation, sponsorship integration and business development opportunities to drive Gods Reign’s commercial growth of esports and gaming initiatives. The association with DNA Entertainment Networks will help Gods Reign build on its existing strengths in eSports by leveraging DNA’s expertise and experience in the field of event management.

The cooperation comes at a time when the esports ecosystem is beginning to emerge as a viable business opportunity, with over 450 million gamers by 2023 and a valuation of USD 7 billion by 2026. Driven by the pandemic the surge in the adoption of mobile, PC and console games has feasibly increased. Resulting in a boost in the number of emerging icons, professional gamers and uprisings of esports contests. Gods Reign with this partnership has made efforts to channelise this talent pool to create the best of its kind of content.

“We are certain that India’s eSports space is in a phase of exponential growth. In terms of active players, the country ranks second after China, with over 400 gaming organisations catering to the diverse demands of the gaming community. Our efforts are to redefine the approach and develop an end-to-end gaming ecosystem to cater for this demand. By joining hands with DNA Entertainment Network, we will be able to maximise our core operations by strengthening the competitive excellence of our teams and developing engaging, instructive, and entertaining content,” said KR Rohith, CEO, Gods Reign.

DNA Entertainment Networks has extensive experience as a full-service provider covering event planning, marketing, hospitality and partnership. It is the official event management agency and the exclusive commercial partner for Royal Challengers Bangalore and has previously worked with several notable eSports brands and teams. Established in 1987 the organisation has been managing live entertainment, sport and corporate experiences across South-east Asia.

“It is certain to us that esports in India deserves its footing in the global arena. New innovations in video gaming globally have unfolded exciting opportunities for young entrepreneurs. The scale at which it is growing makes us, DNA Entertainment Networks, very excited to finally throw our hat in by partnering with one of India’s most competitive esports organisations – God’s Reign. With our pioneering presence in sportainment, we aim to elevate the esports industry by having Gods Reign lead the frontier in this new exciting domain,” said Rohahn Vardhan, Director, DNA Entertainment Networks.

Gods Reign presently operates top competitive eSports teams in major gaming IPs including Valorant, PUBG, FIFA-E, and Pokémon Unite, and has signed over 20 gaming content creators to engage with regional audiences. The company is already making million-dollar investments to accelerate its eSports operations, create best-in-class gaming entertainment content, and deliver superlative fan engagement. It has also outlined its plans to venture into a merchandising and apparel business built around gaming and eSports IPs.