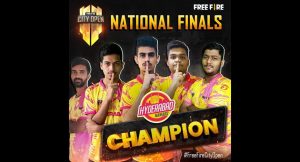 Grand finals saw over 20 million views across all broadcast channels

Free Fire’s inaugural Free Fire City Open (FFCO) concluded on 15 August, garnering over 20 million total views across 4 language broadcasts. We would like to share some of the tournament’s key highlights with you. The recently concluded FFCO was the first-ever Free Fire tournament in India where players – known as Survivors – battled for a chance to represent their own city/state. The first-of-its-kind national tournament featured the top 12 Free Fire teams from across the nation as they competed to win from a prize pool of INR 60 lakh. These 12 teams consisted of the 10 top teams from 8 states, which have been named after their major cities – Ahmedabad, Chennai, Delhi, Hyderabad, Kolkata, Lucknow, Mumbai, and Visakhapatnam – and two “wildcard” entries, Dehradun and Punjab.  All teams qualified through the open qualifiers that were open to all players in participating cities.

The FFCO tournament culminated with the National Finals on 15 August, India’s Independence Day. The National Finals was highly successful with over 20 million views across the various official platforms – YouTube, Facebook, and Booyah! The Hindi YouTube broadcast garnered the highest viewership with over 15 million views. The event was also broadcasted in Tamil, Bengali, and English, which attracted total viewership of above 2 million.

With the massive prize pool of INR 60,00,000 up for grabs, all 12 teams held nothing back and it was a close fight up till the very end. After 6 hard-fought rounds, the Hyderabad Nawabs (Team Captains) emerged victorious, taking home the lion’s share of the prize pool (INR 15,00,000), as well as the title of FFCO National Champions. They narrowly beat out the runners-up team, Delhi Titans (Team OP), by just one point, and third placed Lucknow Tigers (Team Elite) were also close behind, only two points shy of the team hailing from Delhi.

There were also awards for the team with the Top Kills which was bagged by Lucknow Tigers (Team Elite), earning for themselves INR 1,00,000, and the Most Valuable Player (MVP) which was clinched by Swastik from Mumbai Strikers (4 Unknown – Galaxy Racer) winning INR 50,000. All in all, a total of 189 players walked home with a portion of prize pool, including awards for placing in the top 4 in the City Finals for each region and 12 prizes for all the teams participating in the National Finals.