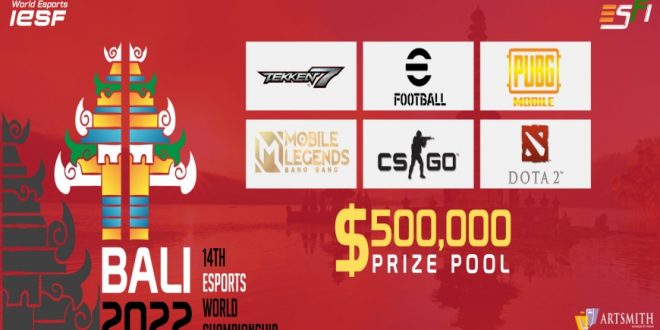 The International Esports Federation (IESF) on Friday announced a total prize pool of USD 500,000 to be awarded at the upcoming 14th WE Championships Finals, taking place in Bali, Indonesia from 27 November to 9 December. The WE Championships prize pool has seen an unprecedented increase in just one year, from USD 55,000 in 2021 to USD 500,000 this year.

IESF President Vlad Marinescu said, “We are very excited for this momentous growth of 2022 WE Championships Finals prize pool to $500,000, which is representative of the growing popularity and credibility of our flagship event. We are on track to hold the biggest and most inclusive WE Championships yet. We look forward to further increasing access to professional Esports opportunities and providing athletes with the ultimate environment to perform at their full potential.”

Yugal Kishore Sharma, Director of Esports Federation of India (ESFI) said, “It’s a very opportune time for the announcement of the 14th Edition of the 2022 World Esports Championships by IESF. The titles included in the championship are CS: GO, Dota 2, Tekken 7, eFootball, PUBG Mobile and Mobile Legends: Bang Bang, we have very strong chances of winning Medals across these titles (other than the ones banned in India). This year’s championship will be the biggest in the history of esports with the expected participation of around 1,000 pro teams/ athletes participating in a single event. The prize will also be the highest one ever announced by IESF. With an enormous prize pool of USD 500k, ESFI will host the national qualifiers for this championship and send our country’s contingent to compete at IESF’s flagship event in Bali, Indonesia.”