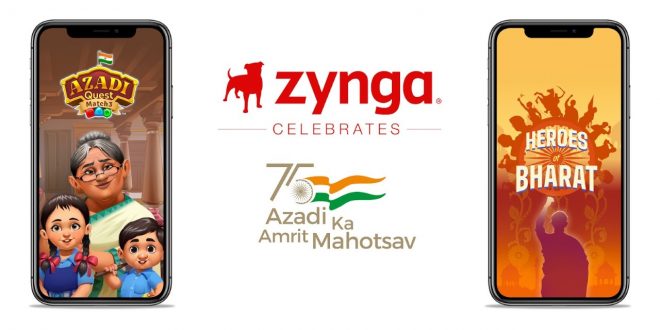 Zynga Inc., a wholly-owned publishing label of Take-Two Interactive (NASDAQ: TTWO) and a global leader in interactive entertainment, announced that it is partnering with India’s Ministry of Information and Broadcasting to launch an educational game campaign celebrating Azadi Ka Amrit Mahotsav, an initiative of the Government of India commemorating 75 years of independence. On this historic occasion, Zynga will be releasing two mobile games in India, Azadi Quest: Match 3 and Azadi Quest: Heroes of Bharat, both available on Google Play and the App Store for free.

Available to players of all ages in both English and Hindi, the free games tell the story of India’s journey to independence interwoven with fun gameplay. Both games will offer players an official certificate of completion to recognize their accomplishments.

“The path to independence commemorates a transformative milestone in India’s history and we are proud to be a part of this important national effort to honour India’s past. Our mission at Zynga is to connect people through games. This initiative is designed to engage players of all ages while harnessing the power of interactive entertainment as a teaching experience about this important era,” said Kishore Kichili, Senior Vice President Games and Country Head of Zynga India.

In the first game, Azadi Quest: Match 3 Puzzle, players are guided by a lovable cast of characters. Grandma, (or Daadi), narrates the game to her granddaughter Rekha, an eager student of history, Chhotu, Rekha’s impatient younger brother, and their friendly pup, Sheru. As the curious grandchildren gather around Grandma to listen to her memories, mobile players are transported to follow the colourful journey of India’s independence.

The game honours the Azadi Ka Amrit Mahotsav initiative to celebrate and commemorate India’s 75 years of independence and the history of its people, culture, and achievements. Azadi Quest: Match 3 captures this narrative to educate mobile players in an interactive format, highlighting important freedom fighters, historic milestones, and iconic movements as players progress through gameplay. During their journey, players can collect trivia cards showcasing key moments in history, compete on leaderboards, and share in-game rewards and progress on social media.

Azadi Quest: Heroes of Bharat, the second game, which includes 750 questions about India’s quest for independence, is designed as a quiz game to test and educate mobile gamers about their knowledge of unsung ‘Azad Veer’ heroes of India’s independence. Players can collect 75 trivia cards with special silver and gold versions that can be unlocked through replay.

“What better medium than gaming could be there to engage the youth to ensure they know the history of our country. These mobile games use the interactive medium to engage, entertain, and educate the people of India and abroad about the efforts of numerous unsung heroes of the Indian freedom movement,” said Shri Anurag Singh Thakur, the Minister of Information & Broadcasting.

Azadi Quest: Match 3 and Azadi Quest: Heroes of Bharat are available to download free on Google Play and the App Store.