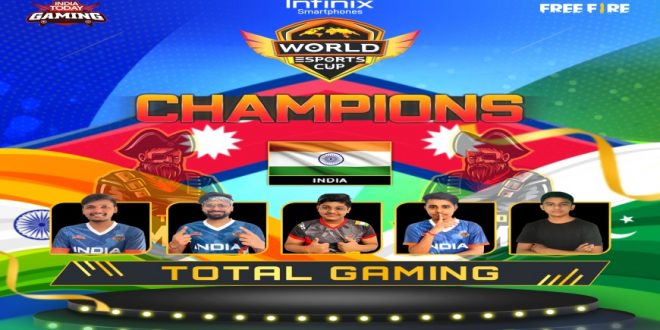 Demonstrating top skills and outclassing opponents from Pakistan and Nepal in the Global Finals, India’s Total Gaming lifted the title as the action-packed inaugural edition of the World Esports Cup 2021 (WEC ’21) concluded with a bang.

Global Finals saw a thrilling competition between twelve of the most impressive and skilled teams from India, Pakistan and Nepal. Teams from India—Total Gaming, Chemin Esports, Orangutan Elite and Arrow Esports—put up a solid show right from the Day 1 of the five-day final stage. With a brilliant attacking as well as defensive strategy, tactics and coordination, they dominated the teams from Pakistan and Nepal and finished in the top four.

A neck-to-neck competition saw Total Gaming, comprising of skilled and renowned players including captain Ajay Sharma, Hora Vetkumar, Narai Yadav, Daksh Garg, and Rohit Sarraf (sub), getting past the other teams across three countries for the prestigious title with 342 total points (RP 198, KP 144) as they also took home the INR 35 lakh for their top spot finish. Chemin Esports and Orangutan Elite secured second and third position respectively and won prize money of INR 15 lakh and INR 8 lakh.  Total Gaming’s Daksh also known as Mafia, with 53 kills, was adjudged the Most Valuable Player of the Tournament and also received Rs 50,000.

Vishwalok Nath, Director, WEC ’21 said, “The esports athletes across three countries showcased their A-game in the global finals and the competition was nothing short of top-class. We are driven by our association by working with a bunch of talented players across India, Pakistan and Nepal and this serves as the perfect set-up to take our marque property to new heights. The five-day global finals witnessed top-notch performances by the participating teams and players. I congratulate all the teams as there is nothing called losing but learning which everyone got from this tournament. I hope these athletes will further utilise this experience and win medals for their country in the coming time,”

“This inaugural edition has been a stupendous success in every possible way. As tournaments like these become bigger and grander. We are continuing to see a growing interest among the youth to take up esports professionally. We are also thankful to all our sponsors and stakeholders for their endless support and belief. We’re already looking forward to season 2 of our popular IP Esports Premier League,” Nath added.