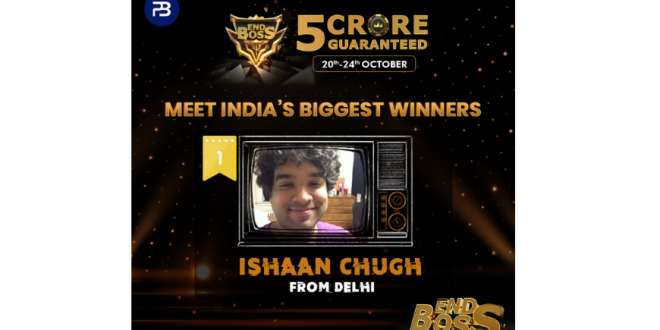 Its Wrap For 2021 Edition Of Poker Tournament EndBoss

Ishaan Chugh, an MIT graduate, crowned as the winner among the 4800+ entries

Delhi based 31-year-old MIT graduate, Ishaan Chugh, emerged as the winner of the tournament and took home over 71 Lakh as the prize money.

The five-day action-packed tournament witnessed the participation of over 4800 poker players from different parts of the country, each trying to take down the mammoth prize pool.

“Tournaments of this scale are a testament to the fast-growing poker landscape in India. What was interesting to see was how we had players from different age groups, and from different walks of life take part in the event,” said, Founder and CEO of Baazi Games, Navkiran Singh.

While Ishaan took away the top spot and earned the EndBoss title, Dhiraj Lakhotia from Darjeeling emerged as the runner up, followed by Divanshu Khurana from Gurgaon, who bagged the 3rd prize.