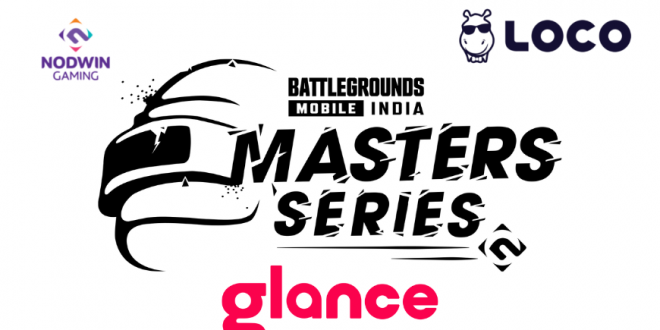 NODWIN Gaming’s upcoming mega BGMI Master Series Tournament is set to go live from June 24, 2022. NODWIN Gaming, among the world’s leading esports companies, has onboarded India’s leading game streaming and esports platform, Loco and the android lock-screen platform Glance as its digital streaming partner for the mega event that is set to change the way esports is perceived in India.

A pioneer in the live game streaming and esports sector in India, Loco is paving the way for gaming to go from a niche hobby to mainstream national interest. The platform has organized over 32 BGMI tournaments since its launch, witnessing a steady rise in its live viewership numbers.

Commenting on the association, Ashwin Suresh, Founder, Loco said, “We are very excited to partner with NODWIN Gaming once again after our landmark NODWIN Loco All Stars Invitational in April which saw the highest concurrent viewership for any esports tournament on an Indian game streaming platform. NODWIN is looking to take things to the next level with the BGMI Master Series and there’s no better home for it than India’s largest game streaming platform, Loco. Being the Indian gaming community’s town square, we expect a majority of viewership for this tournament to occur on Loco and we look forward to delighting our users with yet another high quality event experience.”

We are very excited about this never-before-attempted televised esports event. We’re making sure the tournament can be accessed across platforms be it television or the digital medium.  You can watch it on Star Sports 2, and we’ve also tied up with Loco and Glance Live for further digital access. Through these partnerships, we want to amplify the biggest event in the esports calendar this year! Both these brands will give access to advertisers associated with the tournament an extended consumer base while letting us promote a 360-degree outreach to both the digital and linear television audience,” said Akshat Rathee, Co-Founder and Managing Director, NODWIN Gaming

BATTLEGROUNDS MOBILE INDIA Masters Series will be held from June 24 to July 17, 2022, at the NODWIN studios in Delhi. The tournament will award a mega-price pool of INR 1.5 crore. The winning team will be awarded INR 2,500,000 and INR 100,000 for the tournament Most Valuable Player.