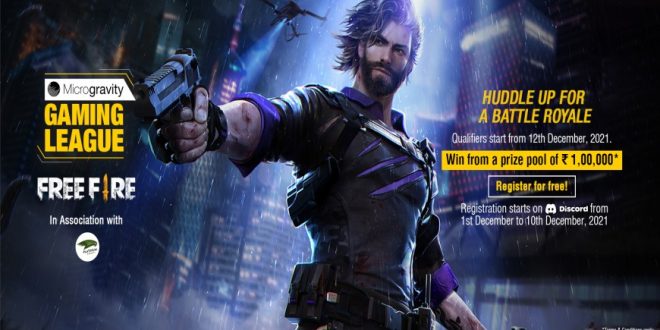 “We strongly believe that MGL Free Fire will be a great success and will serve as a platform for gaming enthusiasts to hone their skills,” said Rahul Bhattacharya

The company will be hosting this e-sports tournament in partnership with Platinum eSports between December 11 to 22.

The format of the tournament will be qualifier and invitation-based, spread out in 5 phases – qualifiers, phase 1, phase 2, semi-finals and grand finals.

Microgravity has announced a total prize pool of Rs. 1 lakh for the top three teams and exciting gaming vouchers redeemable at their world-class gaming facility in Gurugram for the top 5 viewers of the live broadcast.

Teams can register from December 01 to 10 and participate in this competitive all-India tournament.

“We are thrilled to have partnered with Platinum e-sports for the 5th edition of MGL  – a Free Fire tournament. This year, we have witnessed immense enthusiasm and curiosity among Indian games for e-sports tournaments. We strongly believe that MGL Free Fire will be a great success and will serve as a platform for gaming enthusiasts to hone their skills,” said Co-founder and MD of Microgravity, Rahul Bhattacharya.

Through these tournaments, we aim to support and promote gamers in India who are exceptionally talented and need support to further enhance their skills. We are also planning to host several such tournaments with new titles going forward that will help players become more polished in their skills.

Previous Games24x7 To Work Towards Child Welfare; 15,000 Children To Benefit
Next Metaverse, NFT Based Pay To Earn Models Will Drive Gameplay Evolution: Raghavan