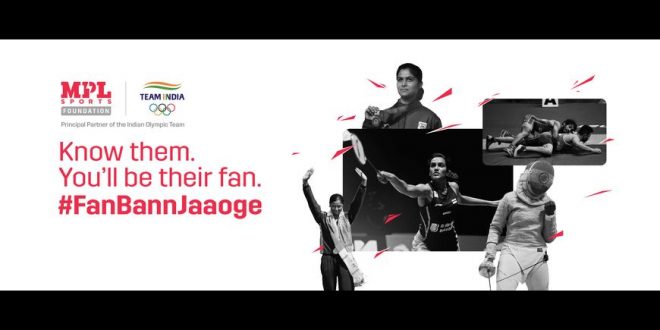 #FanBannJaaoge becomes the clarion call to 1.3 billion Indians across the country

MPL Sports Foundation launched an advertising campaign featuring some of the biggest Indian Olympic stars. This is part of a nationwide fan campaign to rally the 1.3 billion Indians to become fans of the Indian contingent at the 2020 Tokyo Summer Olympics.

“The Olympics is the world’s biggest sporting stage and truly a sports movement that cuts across all boundaries. The athletes representing us come from the length and breadth of India and we want the entire country to rally behind them as they seek to bring us laurels. We hope this movement galvanises all Indians to become fans of the Indian Olympic team,” said Sai Srinivas, Trustee, MPL Sports Foundation and Co-Founder and CEO, MPL.

As part of this movement, the Foundation will release a campaign called #FanBannJaaoge across mediums like TV, digital and print media. The campaign features a film in multiple languages with some of the stars of the Indian contingent such as PV Sindhu, Wrestler Bajrang Punia, Fencer Bhavani Devi, Shooter Manu Bhaker, and others.

The term #FanBannJaaoge itself encapsulates the idea of this movement, which conveys that these athletes have such inspiring and decorated lives, that every Indian would undoubtedly become their fan and throw their weight behind them as these athletes seek to bring India glory at the Olympics.

This will be a virtual fan army with the fans expected to cheer for the team, watch the matches and submit their fan moments through photographs, videos, emojis and illustrations.