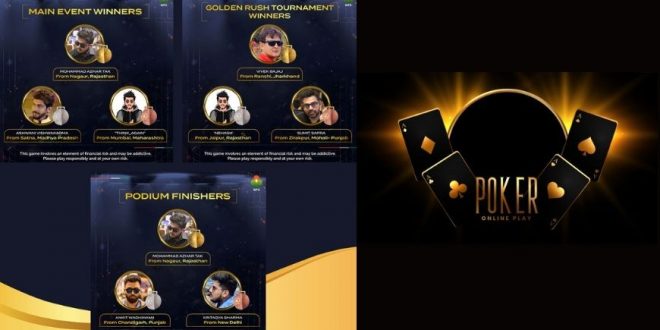 The series witnessed 83,793 entries across the 15 days tournament  and crowned India’s first medal winners in poker, including 64 gold winners

In an effort to boost the rising appetite for poker in India, Baazi Games, a gaming tech group, with products for skill-based games like poker, rummy, and fantasy sports, concluded the first-ever online edition of the National Poker Series recently and saw a nation-wide pool of India’s amazing poker talent. The debut edition recorded a whopping 83,793 entries from across the country and the winners took home a staggering prize pool of more than INR 19 crores.

Commenting on the success of the National Poker Series, Navkiran Singh, Founder & CEO at Baazi Games, said, “We are over-joyed with the immense enthusiasm and love that the poker patrons across the nation have showcased during this 15-days gala. The National Poker Series, hosted on PokerBaazi.com ended on a high note as we witnessed exponential audience participation which crossed our anticipated mark and unveiled some hidden gems and marvels who excel in the game of poker. Moreover, the success of the series is a testament to our efforts towards pivoting the perception of poker in India as a skill-based game that provides an opportunity to challenge the human mind. I would also like to acknowledge the dedication and diligence that our teams have gone behind to ensure the success of this tournament. As we conclude the debut edition of NPS, we are already geared up to start planning for the next season and bring some exciting opportunities to the table.”

Talking about his victory and experience, NPS Podium Gold Medalist Mohammad Azhar Tak from Nagaur, Rajasthan said, “This edition of NPS has been more than participating in just one or two events. The main event is my third victory and the toughest one so far, where I took the field down. It’s one of the greatest feats that I have been going after for a very long time. NPS has been a great experience and I have secured the first position for the Vegas package. Moreover, it is unreal to believe that I will be representing India internationally. I am looking forward to my trip to Vegas, where I plan to discover all things poker.”

The series witnessed some nail-biting poker tables and scaled new heights by throwing open the platform for one-and-all to try their hand at the game of poker. Furthermore, the NPS Podium Finishers, the players with the most valuable medal hauls across the series, Mohammad Azhar Tak (Nagaur, Rajasthan), Ankit Wadhawan (Chandigarh, Punjab), and Kritagya Sharma (New Delhi) who won the gold, silver, and bronze medals, will be representing India at an international platform in one of the biggest poker events of the world to be conducted in Las Vegas.