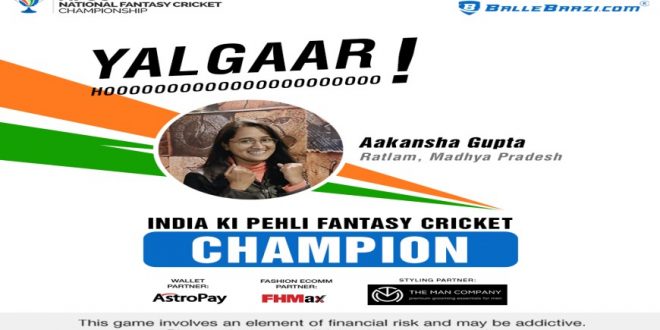 The National Fantasy Cricket Championship (NFCC) hosted on BalleBaazi concluded on a high note with Aakansha Gupta, a CA aspirant, from Madhya Pradesh being crowned the champion with 783.5 points.

According to the official statement, Gupta will take home the winning prize pool and an opportunity to travel to Lord’s Cricket Ground.

The 23-days long multi-tier tournament recorded over 1.8 lakh total entries from across India and saw over 62 lakhs teams being made during the period of the tournament.

“NFCC has truly outdone our expectations and has set the standards for the upcoming editions of the tournament which is scheduled to be organized alongside IPL 2022. Though this was the very first edition of the tournament, it has certainly set the tone for changing the perception about fantasy sports from just about money to all about glory. Further, I would like to congratulate Aakansha and all other 10 winners on their achievement,” said the Co-founder and CEO of BalleBaazi Saurabh Chopra.

Meanwhile, the ten other winners will be awarded a golden bat along with exclusive leaderboard cash prizes, the statement added.

“NFCC was truly a unique experience for me. I have been indulging in fantasy sports for a long but haven’t had the opportunity to compete in such a large-scale tournament where we felt that we are truly progressing in our own matchups as the tournament progresses. I would like to congratulate all the other winners and BalleBaazi for coming up with such a unique concept,” said Aakansha Gupta.

The grand finale of the National Fantasy Cricket Championship took place on November 14, 2021. However, due to a tie for the top spot, the winner couldn’t be decided on the same day.