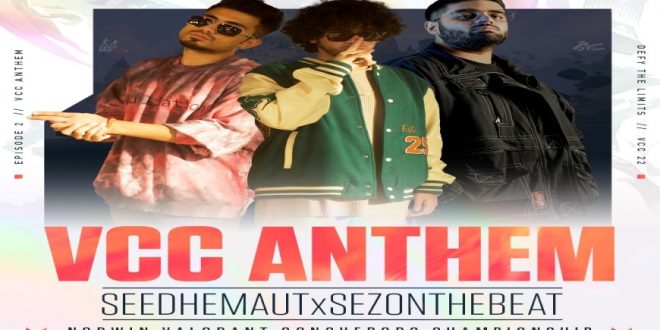 NODWIN Gaming, a material subsidiary of Nazara Technologies and South Asia’s leading esports gaming company, has brought together the two worlds of music and esports for its top tier tournament – Valorant Conquerors Championship.

NODWIN Gaming, along with Riot Games- developer and publisher of the popular PC game Valorant, has roped in contemporary hip-hop artist Seedhe Maut and music producer Sez on the beat to create an epic, celebratory and inspiring anthem for the entire Valorant community in South Asia.

The track is titled “NHK, which stands for Nahi Hora Kya” and will be premiered on NODWIN gaming’s  official YouTube on February 19.

This video features some of the most popular Valorant players from the South Asian region battling their way to the VCC title, such as Ganesh Gangadhar (Skrossi) from the Indian team Global Esports; Shakir Razak (Hikka) from the Indian team Enigma Gaming; Abdul Haseeb (HSB) from the Pakistan team Team Exploit and Sami Ar Rahman (SSSami) from the Bangladeshi team Exceeli Esports.

“With just two editions, VCC has achieved the cult status it enjoys today, making it evident that it has struck the right chord with both the players and audience alike. The idea behind this anthem is to create a distinct identity for VCC and to celebrate the fandom and cult status around Valorant. Through this anthem, we hope to instil courage and passion in the minds of all current and future gamers, bringing them together for the love of the game. What makes this anthem very unique is that the viewers get to witness the spirit of the tournament through the players’ journey as they try to win the coveted VCC trophy. We are delighted to collaborate with Seedhe Maut and Sez who understand the pulse of the youth,” said Akshat Rathee, Managing Director, NODWIN Gaming.

The lyrics and visual elements of the anthem beautifully capture the emotions and spirit of every professional player who strives to reach the top despite all odds with an aim to become a hero through sheer hard work, determination, and talent. The anthem captures the entire journey in the life of a Valorant player from Nahi Hora Kya to Ab Aisa Kuch Bhi Nahi Jo Mujhse Nahi Hora Yaha.

“Being big fans of the game, it was great to be able to work on the official track for Valorant with our guy Sez on the Beat. Music and gaming are converging nowadays like never before, shoutout to NODWIN VCC for supporting gaming and the culture like they do!” said Seedhe Maut.

“Having played the game myself, this song is a dream project for me. I have been following the pro-scene for a while now (since the first Masters) and it’s great to see similar support for South Asian players. Big thump ups to Riot Games for their vision and to NODWIN Gaming for bringing all of us together. The fact that VCC winners will be able to go head-to-head with the best teams from the world is really so  dope,” said the Producer Sez on the Beat.

“I think we have a banger ready to roll out. Seedhe Maut and Sez On The Beat, as we know, are Valorant fans and they’re killing it in DHH lately. We wanted this collaboration to be an authentic South Asian Valorant esport experience that truly embodies the spirit of VCC. It’ll be a track that every Valorant player in the region can relate and vibe to,”  said Sukamal Pegu, Head of Publishing, India & South Asia, Riot Games.