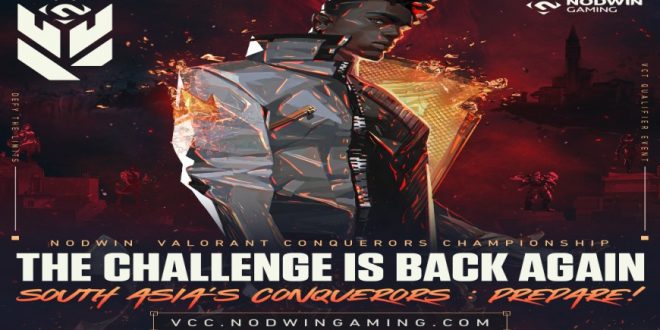 Nodwin Gaming, an South Asian esports company on Thursday said that it has opened registrations for its Valorant Conquerors Championship (VCC) 2022 from January, 06 onwards.

The event will give players the chance to win a prize pool of USD 30,000 which also includes a reward of USD 1,500 for the Most Valuable Player (MVP) of the tournament.

VCC also gives the participating players an opportunity to qualify for the Asia Pacific (APAC) Challenger Playoffs Split 1. The winning team from there will then compete at the VCT 2022 Masters Split 1, as per the official statement.

“The first edition of VCC set the benchmark high in the South Asian Valorant Circuit. Right from the tournament structure, prize pool, player skill level to the overall tournament hygiene, each element was lauded among the esports fraternity. With this edition, we have taken it a notch higher and aim to establish VCC as a strong regional tournament at the global level,” said Akshat Rathee, MD & Co-Founder, Nodwin Gaming.

“It’s been great partnering with Nodwin Gaming to give the esports ecosystem such a huge and popular IP like VCC. With this edition, we promise to provide the most thrilling gaming experience for our players, even as we foresee more participation, a larger audience viewership and intense competition as the stakes are much higher. May the best team win,” said Sukamal Pegu, Publishing Leader, India and South Asia, Riot Games.