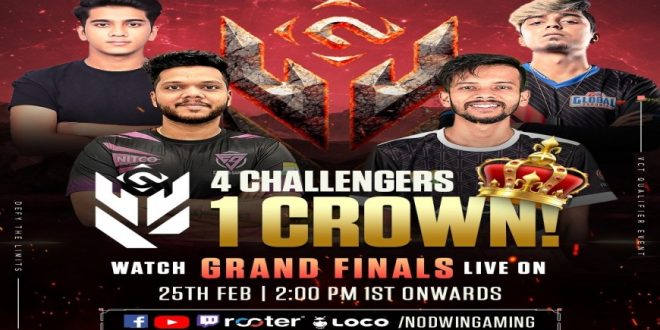 Nodwin Gaming, a material subsidiary of Nazara Technologies has said that the grand finale of its tournament Valorant Conquerors Championship (VCC) 2022 will stream live on its YouTube channel from February 25 to 27.

According to the press statement, the knockout round will see the super talented teams Velocity Gaming, Enigma Gaming, Team Exploit, and Global Esports battle it out for the coveted title and a prize pool of USD 30,000.

The tournament will also award $1,500 to the Most Valuable Player (MVP) of the tournament that began in January this year, the statement added.

The newly crowned conqueror of VCC 2022 will represent India at the Asia Pacific (APAC) Challenger Playoffs Split 1. Top streamers across the South Asian region will host watch parties on their social media platforms to enjoy this edge-of-the-seat, adrenalin-pumping final clash between the top four teams.

“This has been a fantastic championship! Through the last two months, we’ve seen some of the most talented VALORANT talents emerge from across South Asia. While last year was a trendsetter, this year I can confidently say that we have established VCC as the qualifying tournament for VCT. Congratulations to the top 4 contenders, may the best team win! We’re bringing the party to you, don’t forget to tune in,” said Akshat Rathee, Co-founder and Managing Director, Nodwin Gaming.

The tournament is being organised together with Riot Games, global leaders in game development and publishing.

“We are thrilled to bring to its culmination, a very successful tournament along with  Nodwin Gaming. We can’t wait to see who will be crowned the conqueror this year. Come watch it live with us,” said Sukamal Pegu, Publishing Leader, India and South Asia, Riot Games.