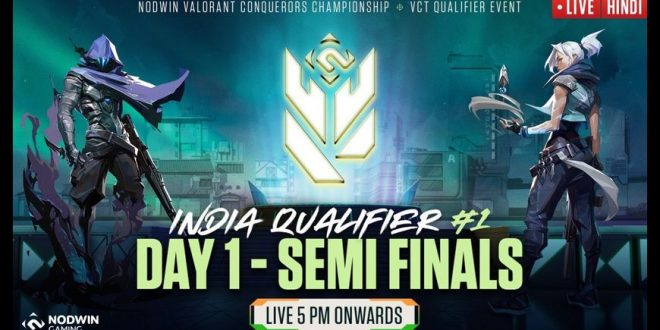 Valorant Conquerors Championship (VCC), a tournament organized by South Asia’s esports company NODWIN Gaming and supported by Riot Games, has broken viewership records for PC sports in India on its Day 2 of Qualifier #1 Finals streamed across NODWIN’s multilingual YouTube and Twitch channels. The final match played between the arch-rivals of the Indian Valorant circuit — Global Esports and Velocity Gaming — went live and marked a record peak of 30K+ concurrent views for the Hindi, English, and Tamil streams combined.

With this win, Velocity Gaming will be the first team from South Asia to secure a spot in the playoffs of VCC. Global esports will get a second chance to participate in the wild card qualifiers. This new record broke the previous all-time-high of a peak viewership of 16K set in early 2021 for the Skyesports Valorant League.

“This is why we love esports! We live for healthy rivalries, the fan-idol moments, and the adrenaline rush of nail-biting clashes. We knew the views for the VCC Qualifier #1 would be phenomenal, but to have the viewership numbers break all previous records, was just incredible. All credits to the amazing supporters of both the teams and lovers of the game in general. This feat would not have been reachable without your love and passion for your idols. This tells us esports has a promising future. It is a huge milestone for us and the industry alike and one that will find a spot in the history of the game as being the turning point. We would like to share the success of our IP with our partner Riot Games,” said Akshat Rathee, MD & Co-Founder, NODWIN Gaming.