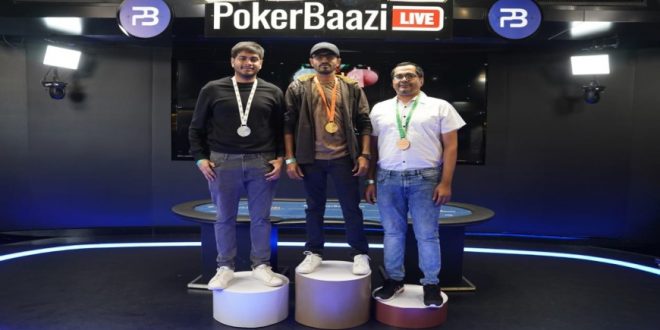 At the conclusion of the tournament, it was Shagun Jain from Jaipur, Rajasthan who claimed the top spot on the NPS podium (medal leaderboard) with 4 gold medals and Two silver (50 Points) and won a package worth Rs 10 lakh.

Rohit Begwani from Churu, Rajasthan ended in second with four gold medals (40 Points) and a package worth Rs 7.5 lakh.

The third spot on the podium was taken by Dhaval Doshi from Mumbai with 1 gold and 3 silver (25 points) and has received a package worth Rs 2.5 lakh. All the three podium finishers will be heading to Las Vegas to represent India on the largest stage of Poker in the world.

The final tables, the first final table was NPS Super High Roller. The table was won by Kartik Ved from Goa who clinched gold, Vipin Pantola from Haldwani, Uttarakhand clinched silver while the third place and bronze medal went to Gokul Raj from Goa.

In the second place, Riteish Kumar (Rs 39.34 lakh) from the small town of Gumla in Jharkhand clinched silver while the third spot and the bronze medal went to Ashutosh Balodhi (Rs 20.90 lakh) from Delhi.

On the final day of the event which had a Rs 550 buy-in and saw nearly 15,000 entries was won by Sankesh Kumar A Jain from Chennai (Rs 9 lakh) took home the gold medal, the silver medal was won by Arbaaz Ahmed (Rs 7.01 lakh) from Bengaluru, Karnataka followed by the bronze medal to Dilip Kumar (Rs 4.38 lakh) from Jalore, Rajasthan.