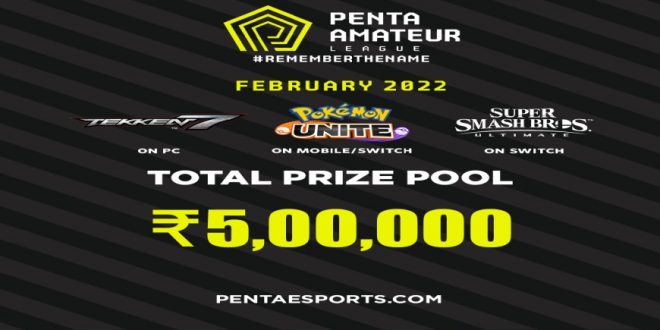 The tournament will feature a total prize pool of Rs 5,00,000. Registrations have started and teams and players can enter the tournament on Penta Esports’ platform pentaesports.com.

The qualifiers of the tournament will run from 14th to 20th February. The finals will be broadcast live on Penta’s Facebook page and YouTube channel from February 25-27. The broadcast will be preceded by the ‘Penta Talk Show’ on February 24.

The ‘Penta Amateur League’ is exclusively for amateurs and semi-professional esports athletes and teams. The games chosen for the tournament throughout the league will be platform-agnostic and will include PC, console and mobile titles. Season 1 of the league will run for six months, October 2021 to March 2022, with a monthly prize pool of Rs 5,00,000, adding up to a total prize pool of Rs 30,00,000.

The January 2022 edition of the league featured Free Fire. The playoffs took place from January 27-29 with team Aura Gaming Esports winning the tournament. The final day of the playoffs also saw a music performance by artist Saahil Bhargava. Apart from Penta Esports’ Facebook page and YouTube channel, the matches were also broadcast on the Booyah! India channel on the Booyah! app.

The broadcast of the finals will be preceded by the Penta Talk Show, where the caster and host will discuss the qualifiers, team and players journeys and possibilities for the finals.

Penta Esports co-founder and head of esports, Kiran Noojibail said, “Our aim is to provide opportunities to aspiring esports athletes irrespective of titles or platforms. The inclusion of multiple esports titles across platforms will add a new dimension to the league and add further value for athletes as well as our partners.”