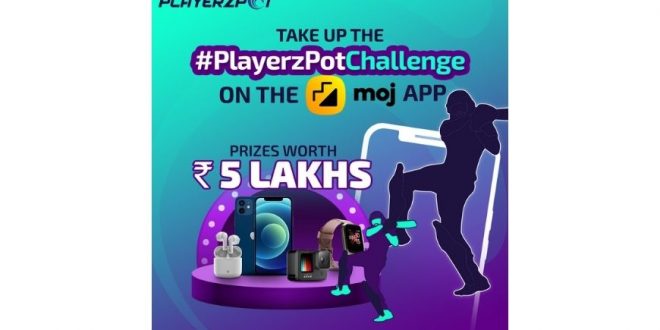 The winners will be announced towards the end of the campaign and they stand to win prizes worth INR 5,00,000

Channelise your inner Rohit and AB De Villiers amongst others with the #PlayerzPotChallenge announced by PlayerzPot, and Moj, the popular short video sharing platform. Through the exhilarating ongoing challenge started from 19th September 2021, Moj subscribers can channelize their inner poser to nail the task!

In the challenge, participants enjoy the opportunity to strike their favourite poses of iconic cricketing moments, such as the 360-degree shot by AB DE Villiers, Bhuvneshwar’s bowling style and so on. And by striking the right pose, they stand a chance to win runs based on how well it is done, or even being declared OUT for a pose gone wrong! The audience can participate in the contest by using #PlayerzPotChallenge. The winners will be announced towards the end of the campaign and they stand to win prizes worth INR 5,00,000.

To amp up the noise about the challenge among its 160 million-strong subscriber base, PlayerzPot has roped in more than 40 influencers from across the country including the Hindi-speaking belt, West Bengal, Punjab, Gujarat, Maharashtra, Karnataka and Tamil Nadu. The campaign has enlisted support from popular influencers like Arishfa Khan, Awez Darbar and many more.

Speaking about the association, Sunil Yadav, CEO of PlayerzPot said “We have had a very exciting two years at PlayerzPot. Our IPL campaign also clocked in massive success, we achieved a whopping 50% increase in userbase, 40% increase in overall website visits and 60% increase in Google search. Through this period, we sensed a huge appetite for cricket-related engagement among the GenZ and Millennial population that forms our audience – this is irrespective of genders and geography and our choice of influencers for this challenge reflects this insight. We are thrilled to partner with Moj for this campaign, as the power of the platform is bound to fire up the virtual world. With a 160 million-strong subscriber base that spans the length and breadth of the country, PlayerzPot Challenge is set to become talk of town. We are excited to see how the campaign comes to life.”

Previous Virtual Players Emerging As The Trendsetters
Next PokerBaazi.com Tops The List Of Indian Poker Websites