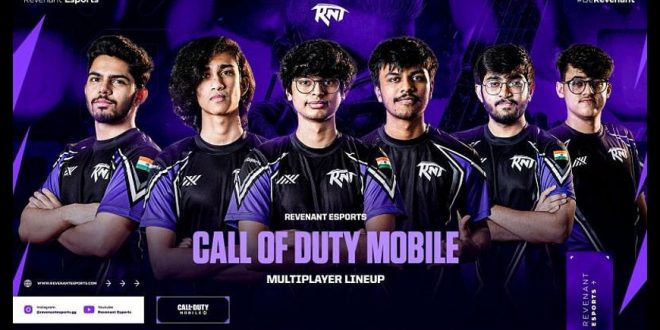 Revenant Esports has announced their brand-new Call of Duty Mobile: Multiplayer roster; close to the heels of announcing their Battlegrounds Mobile India Roster last month. This move is aimed to strengthen leadership in the rankings and to show their commitment to Indian Esports.

Revenant Esports was founded in 2020 and is a destination for casual, aspiring, pro gamers and content creators and has shown exponential growth through 2020. The firm has a strong foothold in the Call of Duty Mobile Competitive scene and has set up a significant e-sports gaming and broadcasting infrastructure. In May 2021, Sajan Raj Kurup led AIF – VenturelandAsia, made close to a million USD investment in Revenant Esports to pick up a 40% stake. Revenant Esports also announced their partnership with Red Bull India, last month.

The new roster is coached by Akash “Candy” Arick veteran Call of Duty Mobile Player from South-East Asia. The line up will be managed by Prashanth “Crunchy” Bafna.

Revenant Esports’ Founder & CEO, Rohit N Jagasia, said, “We enjoy a strong presence in the Call of Duty Mobile space with our Battle Royale lineup – which is one of the best in the country, at the moment. We also ran various academy programs in this title and have created successful IPs like the Revenant Star League & Revenant Duel Arena. The acquisition of this new line up portrays our long-term commitment to Call of Duty Mobile. Our aim is to partner with the best talent whenever we see a sizable opportunity. We are absolutely stoked to partner with this roster and put up a strong performance in the Call of Duty Mobile World Championship and other regional titles.”

Revenant Esports’ brand-new roster consists of experienced and the most feared players in the country. Abyss is said to be the most versatile player in the country. Bones & Rekkles are considered to be some of the best fraggers in India. Xyro is one of the most feared snipers in India. Master has been dominating the CoDM Esports Scene ever since he has been a part of the Call of Duty Mobile Esports scene. OiL is a veteran player with a lot of potential to be a world-class player.

Revenant Esports is now officially a home to over 35+ world-class athletes. Revenant Esports’ brand-new roster will be seen in action in the upcoming Call of Duty Mobile World Championship 2021.