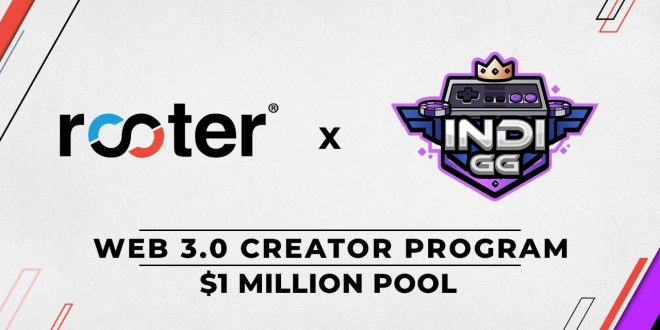 Rooter, a game streaming and esports platform has announced its partnership with the India arm of Yield Guild Games (YGG), IndiGG to focus on launching the “Rooter x IndiGG- Creator Program”, starting from April 10, providing 1000 Web3 gaming creators with a chance to win cash prizes from a pool of 1 million dollars.

A subDAO of YGG backed by the Web3 giant Polygon, IndiGG aims to help Web3 gaming flourish in India. Teaming up with them gives Rooter access to the IndiGG portfolio of Web3 games for passionate Web3 gamers, making them a part of its gaming community.

“We are excited to partner with IndiGG, who are driving the adoption of Web3 gaming in India by onboarding Blockchain gaming creators. Through this association, we will give their gamers access to our Rooter.GG x IndiGG – Creator Program featuring workshops and mentorship, and helps them monetize their content. The partnership will further enable us to proliferate Web3 gaming and be at the forefront of Blockchain game streaming in the Indian gaming industry,” said Dipesh Agarwal, Co-Founder & COO, Rooter.

“We are thrilled to collaborate with the biggest game streaming and eSports platform Rooter to support content creators from our community to stream content of games on the IndiGG portfolio. India is a gaming powerhouse with more than 400mn gamers, which makes it a highly lucrative market for western game studios to find hyperlocal partners to spearhead its distribution in the subcontinent,” said Abhishek Anand, Business Head of IndiGG.