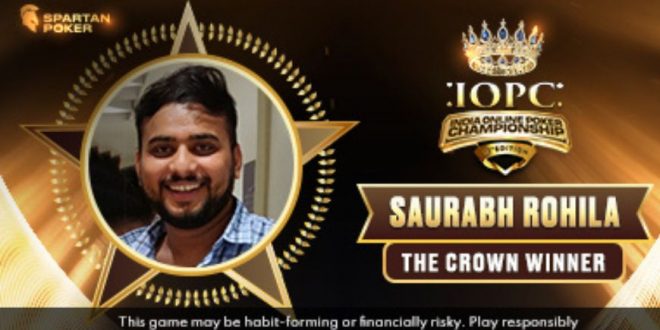 The 13th edition of the IOPC, held in June 2022, with a massive INR 33 crore grand prize, saw participation from across India with 3 lakh plus entries.

The Main Event, ‘The Crown’ , was won by Saurabh Rohila. He had a lucrative payday of INR 53,77,936 along with a diamond-studded crown. This was Rohila’s second title of the series as he shipped the Super High Roller as well just a few days back.

IOPC Legends, with a GTD of INR 2.5 crores, was a multi-flight tournament and was won by Sahil Chutani who grabbed the Legends title and added a massive INR 44,05,871 to his bankroll.

IOPC Blaze with INR 1.5 crore GTD, was won by the IOPC Jan ‘21 Millionaire Legends and Mastermind winner Aniket Waghmare who shipped the tourney for INR 31,23,920.

Another highlight of the series was the Super High Roller, it attracted some of the top online regulars with Rs. 1.25 crore GTD. Saurabh Rohila was the man of the moment as he shipped the prestigious event and won himself a whopping INR 34,97,240 in prize money.

High Roller event was another big one in the championship with a GTD of INR 1 Crore. The biggest winner of the High Roller was Deepak Raina with INR 20,65,415.

The 13th edition of IOPC also had the largest leaderboard of INR 1 crore. IOPC leaderboard smasher Bhanu Prakash defended his title and emerged as the winner. He has previously won the IOPC leaderboard in July 2020, January 2021, January 2022, and now again in June 2022. Prakash also claimed the ‘Player of the Series’ title by topping the leaderboard and taking home an impressive INR 30 Lakh in prize money.

Congratulating the winners, Mr. Amin Rozani, CEO of Spartan Poker Group said, “We couldn’t have hoped for a better and more spectacular way to close the season of IOPC 2022, which saw records broken with over 3L entries. It is a true testimonial to the amount of talent present in the Indian Poker fraternity, and to the ferociousness with which the competitors compete for the prestigious IOPC awards. The incredible response we have been getting year on year keeps us motivated to advance Poker and IOPC to the next levels every edition. With the highest GTD ever this season, Saurabh deservedly won the India Online Poker Championship and many congratulations to him and all the winners.”

Companies are actively attempting to establish a connected universe of virtual realities, and gaming has found a new home in the metaverse. Spartan Poker has created a bespoke space called ‘Spartan-verse’ which will honor legends of the Indian poker fraternity with a virtual Hall of Fame, hosting the winners from all the editions of their mega flagship poker tournament, the India Online Poker Championship (IOPC).