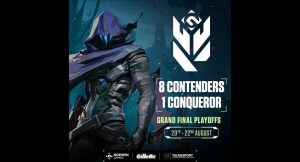 South Asia’s esports company NODWIN Gaming, is all set to broadcast the nail-biting Playoffs between the top eight competing teams of the ongoing Valorant Conquerors Championship (VCC) LIVE on its YouTube Channel from August 20-22, 2021. VCC 2021 will give South Asian Valorant players a chance to qualify for the APAC Last Chance Qualifier and fight for a spot at the Valorant Champions Tour 2021.

The Playoffs will witness the top eight teams battle it out in an edge-of-the-seat nailbiter that will see the winning teams head straight for the grand finals scheduled from August 27 to 29. The winner of the grand finale will take home the lion’s share of the total prize pool of INR 25 Lacs (33,000 USD), the highest so far for any Valorant tournament in the region.

Considering the growing popularity of Valorant and the ability of the players in the region, Riot Games, the global leader in gaming and esports, decided to partner with NODWIN Gaming for the Valorant Conquerors Championship (VCC) putting the region in the VCT 2021 roadmap for the first time. VCC has paved the way for international recognition of South Asian teams and players.