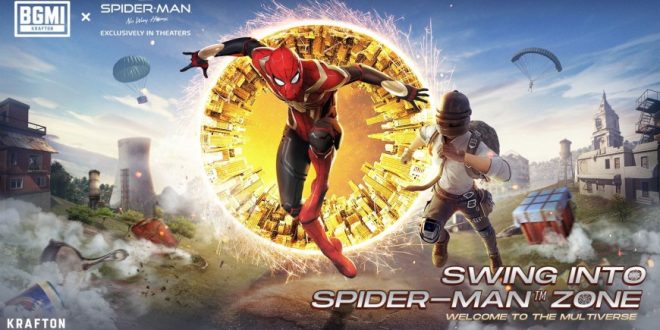 After the smashing box office with stunning numbers, Tom Holland and Zendaya starrer Spider-Man is all set to enter the gaming world. Now, in a recent development, Battlegrounds Mobile India (BGMI) developed by South Korean giant Krafton,  has said that it has partnered with Sony Pictures to bring special content from Spider-Man: No Way Home to the popular battle royale game.

According to reports, Krafton will add special content by which BGMI players will be able to claim by completing several missions in the game.

BGMI in a Facebook post wrote, “Swinging into BGMI soon with rewards and much more! See Spider-Man: No Way Home exclusively in movie theatres! Venture into the Multiverse this New Year with the upcoming collab in January 2022.”

The gaming giant has said that the BGMI Version 1.8 update is all set to come out later this month.

As part of BGMI’s first collaboration with Sony Pictures, the multiplayer battle royale game for Indian players will bring exclusive content to the game, including collaboration skins, as part of the Battlegrounds Mobile India Version 1.8 update.

According to Krafton, BGMI Gamers who complete in-game missions can claim the special items on BGMI.

Meanwhile, the Spider-Man: No Way Home collaboration is going to come on BGMI in “mid-January” however, Krafton is yet to provide an official launch date.