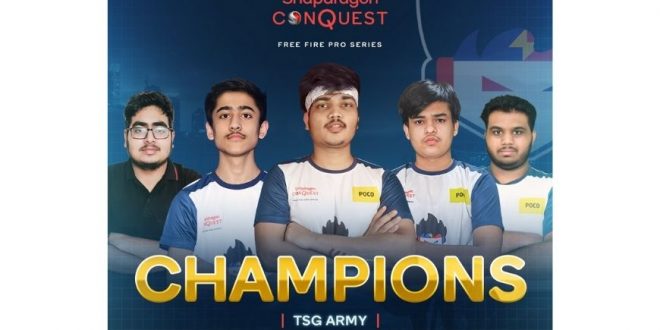 Qualcomm Technologies has announced team ‘TSG Army’ as the winner of the Snapdragon Conquest Free Fire Pro Series in India. Among the 12 finalist teams who battled it out across the two-day finale on October 23-24, ‘D Esports’ and ‘Blind Esports’ finished as the first and the second runner-up respectively.

The Snapdragon Conquest Free Fire Pro Series is Qualcomm Technologies’ ongoing initiative to engage with and nurture promising talent in the fast-growing mobile gaming landscape. The Pro series finale recognized team ‘TSG Army’ for their skillful and thrilling gameplay during the tournament and awarded them with INR 10,00,000. Teams ‘D Esports’ and ‘Blind Esports’ were also appreciated for their flawless execution and rewarded with INR 5,00,000 and INR 2,50,000 respectively.

Congratulating the winners of the Snapdragon Conquest Free Fire Pro Series finale, Rajen Vagadia, President, Qualcomm India, said, “Many congratulations to team TSG Army for winning the Snapdragon Conquest Free Fire Pro Series. We are inspired by the passion displayed by the gaming community in India and will continue to support the fast-growing eSports ecosystem in the country through our technologies and gaming initiatives.”