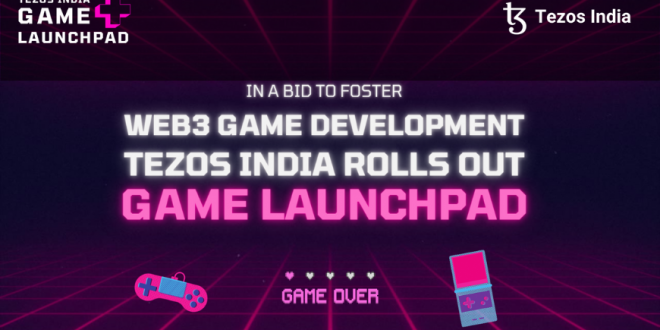 Blockchain adoption entity, Tezos India, has announced the launch of its new initiative titled Tezos India Game Launchpad (TIGL), a platform that will assist game developers with grants, technical support, game publishing, and fundraising that would supports them to launch their games on the Tezos blockchain.

This initiative by Tezos India includes an incubation program, a Web3 gaming handbook, and a Web3 gaming course crafted by the founding team within the Tezos India organization. Tezos India will support game developers by providing Ecosystem Growth Grants (EGG) worth USD 10,000 coupled with an opportunity to join the EGG Incubation Program with TZ APAC, the leading Asia-based blockchain adoption entity supporting the Tezos ecosystem.

Interested game developers can submit their applications with details of the project and roadmap on the TIGL website. The developers will be assisted through technical support, game publishing, and fundraising. Initially, TIGL will help integrate the Tezos blockchain into the game and assist with token (NFT) development and play-to-earn consultancy.

TIGL’s global partners such as Tezotopia, IndiGG, and others will help the game developers collaborate internationally through Strategic Partnerships. Launch Growth Hacks and other bounty campaigns, community building, and social media marketing will also be covered by the initiative.  TIGL will also help the developers participate in the EGG Incubation Program and receive grants from the Tezos Foundation for growth. Selected developers also stand a chance to work with TIGL’s partner Venture Capitalists (VCs) for investment support and gain access to the best game launchpads.

Amanjot Malhotra, Head of Growth at Tezos India, who is spearheading the initiative, said, “There is an exodus of games from Web2 to Web3 as industry leaders have realized the future of gaming is on the blockchain. In this decade, we will see most of the gaming industry moving to the blockchain as the benefits are obvious. To accomplish this, TIGL has formed strategic partnerships with top blockchain games, gaming guilds, and venture capital firms to provide the mentoring and guidance necessary to develop top-notch blockchain games.“

TIGL will provide a free-of-cost gaming handbook that has a collection of 100+ resources to get started with Web3 gaming.

“Web3 games will be the next big thing as it is opening new economic and creative opportunities for gamers and game developers. There is potential to unlock a $100 billion gaming market. With this initiative, Tezos India is setting the stage for a decentralized future in Gaming where massive participation is expected in times to come”, said Om Malviya, President, Tezos India.