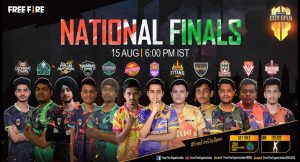 Free Fire has also released some entertaining new content for fans: a new official music video – ‘Booyah For Your City’, and a 2-episode series on YouTube – Aa Dekhe Zara

Garena is excited to announce the National Finals of the Free Fire City Open (FFCO), its first-ever Free Fire tournament in India that had survivors competing for a chance to represent their own city. Kicking things into high gear, the first-of-its-kind tournament will see the top 12 Free Fire teams from across the country battling for glory on India Independence Day to win big from a prize pool of INR 60 lakh. Promising plenty of high-calibre competitive action, the finale will also witness celebrity guests like VasiyoCRJ7, Sooneeta, and Lokesh Gamer. Fans are invited to tune-in and support their favourite teams, and stand a chance to win skins, tokens, and many more exciting rewards.

The 12 teams competing in the Free Fire City Open finale consist of the 10 top teams from 8 states, which have been named after their major city – Delhi, Mumbai, Hyderabad, Ahmedabad, Kolkata, Chennai, Lucknow, and Visakhapatnam– and two “wildcard” entries who hail from outside of these 8 regions – Dehradun and Punjab. Committed to the spirit of #IndiaKaBattleRoyale, Free Fire City Open takes forward Garena’s efforts towards bringing people together through esports and fostering pride within the community as they represent their cities on a national platform.

With the competition heating up, fans from across the country are invited to be a part of the action by tuning in and rallying behind their favourite teams as they battle for glory! To make this an exciting fair for everyone involved, Free Fire is hosting ‘Fastest Finger First’, an opportunity for fans to win ‘Blue Flame Draco AK’ skins. Additionally, fans will also get 20x ‘Green Balloon’ tokens for watching the stream, and a ‘Shake it up’ emote if the number of viewers hits 200k concurrency.

In the run up to the coveted grand finale for the Free fire City Open, Free Fire has released an exclusive ‘Booyah For Your City’ music video. The catchy rap anthem features famous musicians like Ikka, Brodha V, Cizzy, StreetViolater, and Kidshot rapping in 7 different languages to represent the FFCO cities.