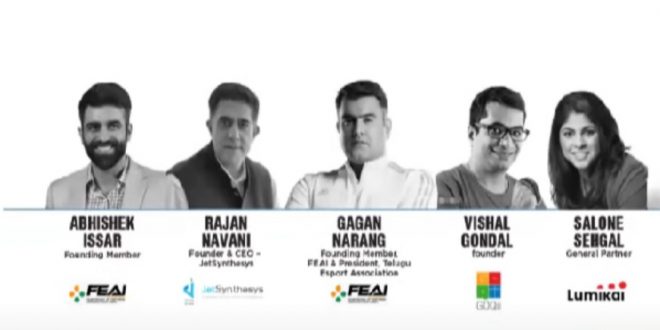 Understanding The Growth Of Indian Gaming Sector In Recent Times

In the last couple of years, gaming has evolved to be one of the most revenue-generating sectors in India and around the globe. According to ComScore, with 252 million unique visitors to games-related sites in March 2021, India is among the top five mobile gaming markets in the world.

“In the 5 odd years, we would be looking at 10.5 per cent incremental growth, reaching a marketing size of 281 billion, almost doubling from the current number. If we are able to attribute these strengths by supporting policy outlook by the government of India, automatically, we are looking at scaling up the potential of India’s gaming market,” said Abhishek Issar, Founding Member, Federation of Electronic Sports Associations India (FEAI).

Talking about the opportunities in the gaming world for people, Gagan Narang, Founding Member, FEAI and President, Telugu Esport Association said, “The whole idea of gaming opens a lot of opportunities for people from the perspective of the athlete.”

“The greater the immersiveness in digital life, the more we believe an opportunity for growth is available to us. The growth that the gaming sector has seen, especially in the last 3 years, has been significant,” said Rajan Navani, Founder and CEO, Jetsynthesys.

“Gaming is growing, but among the top 50 games on Play Store, hardly there are 1-2 Indian games. There needs to be a massive push in creating gaming content in India,” said Vishal Gondal, founder of GOQii & nCore Games.

According to the experts, in 2020 and 2021, various attributes like game usage, game adoption, game monetisation and infrastructure converged to move in the direction of growth amid the ongoing COVID-19 pandemic.

The experts were speaking at an industry event on Indian gaming ecosystem.

Previous Global Game Studios Are keen To Open Their Offices In India: Ranga Jagannath
Next Nazara Commits Investment Of Rs 30 Cr To Griffin Gaming Partners Fund II Over Next 3 Years