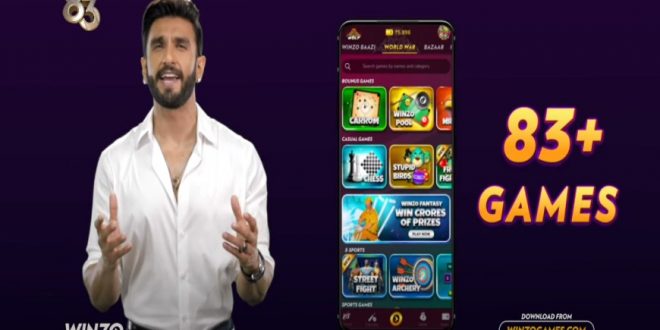 According to the official statement, this collaboration will help bring together billions of Indians from across the country to experience the thrill and excitement of winning.

The movie depicts the inspiring roller coaster journey of the Indian team, considered as an underdog in the 1983 Cricket World Cup tournament, competing ferociously and eventually beating the best teams to clinch the coveted cup.

Similar to 83’s kick of winning, users can experience the same excitement and thrill of winning by participating in 100+ games across 6+ engaging formats offered by WinZO.

To celebrate this association, WinZO is facilitating its users a golden chance to meet Ranveer Singh and other cast members. Users will also stand a chance to win free movie tickets and memorabilia such as autographed cricket bats and jerseys.

Saumya Singh Rathore, Co-founder, WinZO said, “We are thrilled about the association with the movie, 83. The historic win at Lord’s is a day that changed the mindsets and temperament of an entire nation. It reinforced the belief of competing against the best in the world and still emerging victorious, even with limited resources. This mindset is synonymous with what we as a company want to promote amongst our users – the winning spirit. Being the leaders in this space, we see this collaboration with the power house, Ranveer Singh, as a fitting one.”

Sameer Chopra, Head of Marketing, Reliance Entertainment added, “With this collaboration, we intend to reach out to all the young movie fanatics and game lovers. We are thankful to team WinZO for giving us this platform and opportunity to collaborate. WinZO’s association will make this celebration all the more special and grander by giving Indians another chance to reminisce and experience this remarkable win.”